← Gift from a Dying Friend
Teen suicide in Apparition →

Want to Buy a Haunted House?

I’ve always felt that old houses give off emotions, and I’ve been especially aware of it when house-hunting. I know that sounds like basic psychological projecting, but I like to call it intuition.

I think emotions can linger in the air and penetrate walls like cigarette smoke. Most of the time I feel nothing in particular, or nothing that I can name, but every once in a while, there’s a sadness or fear or anger or happiness. Then there’s the whole issue of ghosts. I don’t normally worry about whether the house actually has a ghost, at least not during daylight hours. 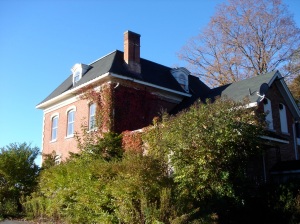 There’s a beautiful old property with boarded up windows and a real estate ‘for sale’ sign only about 5 minutes away from our farmhouse in Grey County. I’ve been inside a few times, because it used to be a restaurant. In fact, it used to be three or four different restaurants over the last dozen years alone. None survived for very long.

I don’t think the problem was ever the food or service.  At least, that’s not what one of the servers in the second last restaurant establishment told us as she waited on our table. She said that everyone who worked there knew that the house is haunted. Specifically, there is a young phantom child, a girl, who hangs around on the second floor. Numerous patrons had seen her over the years.  She told us of a number of strange goings-on in the kitchen too. She even invited us to go take a wander in the empty rooms upstairs before we left, and we did. We didn’t actually see anybody up there but, well, I did have a funny feeling.

I wrote about this place in APPARITION. Morris Dyson tells Amelia about the house’s remarkable and rich history, including its time as a safe house on the Underground Railway for Africans escaping from slavery in the southern United States, and later, as a brothel serving the sailors passing through Owen Sound, a bustling port on the Great Lakes at the turn of the century.

The server also mentioned that the haunted history of the house was included in the legal description when the property last changed hands. Mark Weisleder is a Toronto real estate lawyer who writes a column in Toronto Star, and he had this to say about selling a haunted house: “My advice is that if you know about psychological defects in a property, disclose them and avoid unnecessary proceedings later. If as a buyer you are concerned, include a clause in your contract that the seller has no knowledge that the property is haunted and that no murders or suicides ever occurred on the property.” And if you buy a house that you later discover was known to be haunted, you can always sue. You might win your case.

So, will this house ever be a happy home again? With the big box stores moving ever further east along this stretch of highway leading out of Owen Sound, its future is more likely demolition for some big American store chain’s parking lot.  A sad end, when maybe all that ghost girl needs is a little human kindness.

← Gift from a Dying Friend
Teen suicide in Apparition →

Notes From The GO
YA Book Shelf

Honest to Goodness YA Novel Reviews

Can you explain these photographs?

Gift ideas you can actually buy in Canada

The Word On The Street Blog

My Apparition: All about Ghosts

The Art and Craft of Blogging

The latest news on WordPress.com and the WordPress community.