← 5 Steps to Ley Lines in Apparition
Want to Buy a Haunted House? →

Gift from a Dying Friend 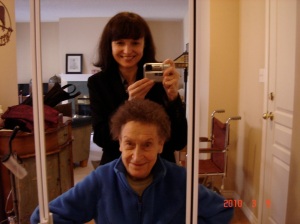 About four years ago, I called Fran on the phone, feeling particularly demoralized about my career. She’d heard it all before, but this time, she thought for a moment, then said, “Gail, I think you are at a crossroads, and crossroads don’t last forever.” She told me I should “follow my bliss”.

I don’t know why, but something about her mixed metaphor struck me. I got an image in my head of standing at a crossroads, not one I’d come across, but one that had come across me. Like an act of grace. Would I just stand there, and let that crossroads fly on past? A few weeks later, I started moonlighting, writing a novel. It was something I’d been thinking about doing all my life. I’d just never been able to start before.

When Fran and I met about 25 years ago, we were both in bad shape. She had been forced to give up a career that had been her life for many years. I had just left a marriage. We were both racked with loss and regret and failure. She was a generation older, but we felt like sisters. We shed tears together, exchanged fears, and gave each other moral support. Our friendship grew.

I’d never met anyone with more generosity of spirit, and more steadfast faith in her friends and family than Fran. But she had constant health problems, mysterious ailments and symptoms without known causes. She was like a modern version of Job, harassed by God in some perverse test of her faith. She persevered, never losing her spirit of enthusiasm for life or her dogged belief in family and friends, in culture and the arts, and in simple human kindness.

When Fran eventually moved from Toronto to the West Coast to be closer to her two daughters and her grandson, I was heartbroken. I missed her horribly and mourned her absence for many months, until we fell into a regular rhythm of phone calls, and my annual week-long visits. She was a perfect fit for Victoria, settling into the coffeehouse culture, joining a book club filled with other exceptional older women, delighting in her garden, fawning on her family.

We kept up with each other’s lives by phone. She was always full of anecdotes about her latest crazy adventure, kooky characters she’d met and everyday miracles she’d experienced. She was endlessly entertaining. She could also do tough love very well, with pointed questions and strong advice when she thought I needed it.

But her health deteriorated further, and there was finally a formal diagnosis. Fran had Amyloidosis, one of those rare terminal conditions you’d hear about on the TV show ‘House’, proteins produced in her bone marrow were slowly attacking and undermining her vital organs – heart, kidneys and lungs, but especially her heart and lungs. She saw specialists who offered no answers and little hope. She tried all kinds of medications. She came to depend on an oxygen tank, flying down the sidewalk in her motorized three-wheel scooter, tank in basket, heading for the coffee shop.

There were many bad patches. Several years ago she was given about three months to live. She defied the doctors and held on. She was always breathless, though, and the phone calls got shorter. I sometimes worried that I was being selfish, wanting to talk, wanting to listen, keeping her on the phone longer than I should. Her body seemed frailer by the week, but her grip on life remained sure.

One day I ventured to tell her that if my novel was ever published, I was going to dedicate it to her. For me, there had never been any doubt. Fran seemed pleased, but we both knew why I’d told her, and it cast a slight shadow over the moment. Because neither of us believed she’d live long enough to see the day.

Fran was kept alive by homecare workers and the heroic efforts of her daughters and sister, and her own stubborn love. Her life became a constant struggle just to breath. Every day, every hour, every breath could be her last. She suffered with courage. She talked with me about death, what she feared, what she didn’t fear.

The last time I got her on the phone, just before last Christmas, she could barely speak, but she asked me for a favour. I had just received a publishing contract. She wanted me to mail her a photocopy of the first page, so she could see the letterhead, my name and the book title, with her own eyes.

So many of us carry a personal dream through our lives, longing for it, lacking the faith and courage to make it happen. It’s so easy to spend our strongest years only ever on the verge, until we finally decide it’s too late. We’re too old. What confluence of circumstances makes the difference, creates the moment wherein we finally begin? I don’t know. I only know that Fran was standing close by when it happened to me.

In the days that followed, her daughter Kelly answered the phone when I called. She said her mother was too weak to talk to me, but she’d received my card and was so happy for me. About a week after Christmas, she was finally moved to a hospice, and with the family around her bed, the hospice doctor asking Fran if there was anything she needed. “Champagne?” she whispered.

She slipped gently into unconsciousness within a day or two and died. My novel was released about 9 months later. I like to imagine she’s reading it in a coffee shop in Victoria right now. I hope she likes it, and knows how grateful I am for her friendship.

Posted on November 23, 2013, in Gift from a Dying Friend and tagged Amyloidosis, Death of a Friend, first novel. Bookmark the permalink. 6 Comments.

← 5 Steps to Ley Lines in Apparition
Want to Buy a Haunted House? →

Notes From The GO
YA Book Shelf

Honest to Goodness YA Novel Reviews

Can you explain these photographs?

Gift ideas you can actually buy in Canada

The Word On The Street Blog

My Apparition: All about Ghosts

The Art and Craft of Blogging

The latest news on WordPress.com and the WordPress community.